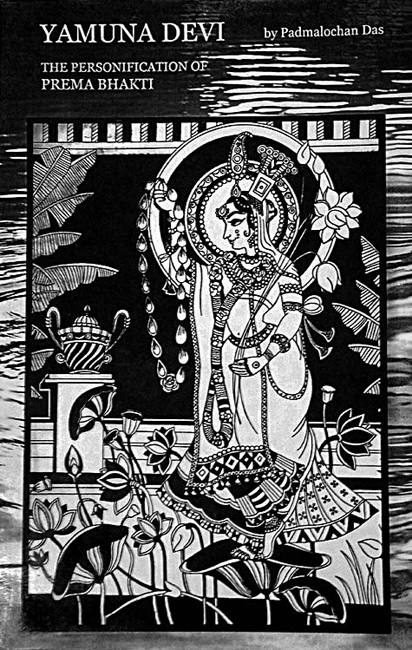 Oct 29, 2011 — SRIDHAM MAYAPUR, WEST BENGAL (SUN) — The new re-print of the YAMUNA DEVI book by Padmalochan das is now out and available for distribution. The book is 50 pages, compact and nicely bound in a soft glossy cover. Please order this book, I can send them via post. Mail order starts at minimum 10 copies @ ONE US$ per one book ($1=1 book), shipment charges separate.

Money raised from the sale of YAMUNA DEVI book will go towards re-printing the remaining books of my husband: PADA SEVANA is already sponsored and is coming next (very soon), but the other 3 books - CHINTAMANI DHAMA, AUDARYA DHAMA, GITA MAHATMYA - still need sponsorship. Please help sell YAMUNA DEVI book, so money will collect faster for printing these books.

This printing edition of YAMUNA DEVI book was sponsored by H.G. Gaura Nama das, and it is also a tribute to our friend Madhava Prema das, an artist who left his body 40 days after my husband, Padmalochan das... they had a strong connection, which is difficult to explain. The picture of the personification of Yamuna Devi on the front cover is Madhava Prema's art, which he presented to my husband in 1997.

Here are few words in memory of Madhava Prema Prabhu:

Madhava Prema das (1955-2010, Latvia) - artist, poet, architect. Became a devotee in 1982, was one of the first devotees in formal USSR. He actively distributed Srila Prabhupada's books, 1986-96 together with his wife Audarya Dhama dasi was publishing Krishna Conscious magazine RASA, they regularly held Nama-hatta programs at their house. 1996-2001 lived and served in Sri Dham Mayapur. They were invited to take part in Mayapur Project Master Plan Office under the guidance of Abhirama prabhu. First they were working in Bangalore group on finding out the main conception for the Mayapur Master Plan. In 1997 they were sent by SMMPO to Sri Mayapur to take measurements, make drafting and documentation of main visiting objects (Srila Prabhupada Samadhi, Sri Yoga-Pitha, Srila Bhaktivedanta Thakura's residence in Swarup-ganj and Gurukula. Besides they made the sketch project of the gardens in new Temple area for London group, working on new Temple project.

From 1997 they were doing architectural research for setting the general architectural style for the new spiritual town of Sri Mayapur. They have studied the old, traditional Bengali architecture, art, culture, history, by traveling all over the West Bengal (visited about 100 towns and villages), and made about 3,000 photos of old brick Temples of different styles (mostly terracotta) and dwelling houses. They also started working on collecting materials for the future "Bengali Art Museum" (terracotta brick samples, wooden dolls, books about ancient Bengal). After their return to Latvia they published a book, Terracotta Temples of West Bengal, subtitled 'Terracotta Preachers of Krishna Consciousness'.

The book is here